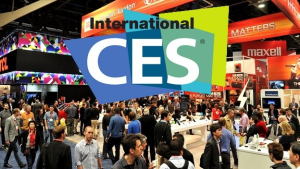 By Dean Pinhas – January 6th through 9th was an exciting time for Journey Grant recipients and University Innovation Fellows alike. During the second weekend of January a group of 12 students lead by faculty members Shelly McVay, Landon Young, and Elise Fisher traveled to Las Vegas, Nevada to partake in a myriad of unique activities to enhance their Jewell learning experience. The trip was planned around the goal of studying tourism marketing and certain key aspects such as its elements, the science behind promotion, the process of signing, and how products play in the Vegas

experience. The trip itself was planned around one key event which professor Shelly McVay described as the weekend’s capstone: The Consumer Electronics Show, known more commonly as CES.

Every year in Las Vegas the biggest technology giants gather for a weekend at CES to showcase their newest gadgets with the most cutting edge innovations in the industry. Professor McVay emphasized the prestige of the show remarking that even some tech companies are not granted credentials to enter the show. However, CES does allow students to enter the show on Saturday mornings given that they provide numerous credentials themselves such as student ID’s and course syllabi in order to confirm their educational goals.

CES was the capstone event of the trip, however, the students partook in a variety of activities over the previous three days to hone in on the other marketing goals they had laid out. The group took a Segway tour around Vegas and saw famous businesses such as the Pawn Stars pawn shop. They visited the Global Soap Project and learned about the organization’s goals and accomplishments. Finally, the group took a Big Red Bus tour and studied the different experiences one can choose from in Vegas based on hotel identities and themes. The overarching goal of the trip was to appreciate the role of products and marketing in Vegas and how different combinations of those two elements provide varying experiences.