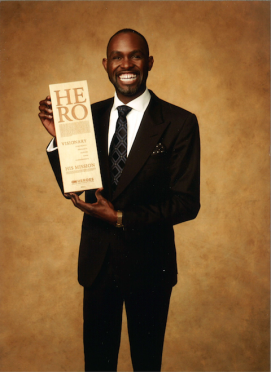 By Amelia Hanzlick – The William Jewell College community welcomed Derreck Kayongo, co-founder of Global Soap Project, to deliver the Distinguished Executive Lecture, “Tapping Your Power to Create Social Change,” on February 3, 2015. Mr. Kayongo, a native of Uganda, came to the United States to study at Fletcher School of Law and Diplomacy at Tufts University and to escape the tragedy of war in his country. Mr. Kayongo currently serves as an advocate for global health through his position with CARE International. Prior to founding the Global Soap Project, Mr. Kayongo worked with Amnesty International and the American Friends Service Committee. In 2011, Mr. Kayongo was named a Top 10 Finalist for the CNN Hero Award for his humanitarian efforts.

When Mr. Kayongo first came to the United States, he spent his first night in a hotel only to be stunned at the amount of soap that is thrown away for each hotel guest. This experience sparked an idea. By recycling this soap and distributing it to underserved communities, he would be able to help the two million people in Africa that die each year due to improper sanitation.

Today, the Global Soap Project reaches 32 countries and has distributed over two million bars of repurposed soap empowering hotel hostesses, soap makers, volunteers, and the soap receivers throughout the process. Proper sanitation can change the face of communities around the world because healthy people miss less school, work, and time being sick. With the organization headquartered in Las Vegas, they have a large supply of soap that filters in from local hotels and hotels worldwide that they are able to recycle and repurpose.

Four principles guide Derreck Kayongo’s life and he shared these with the faculty, staff, students, and guests at the lecture. Intellect, networking, fear, and vision are the four key principles to keep in mind throughout life. Using one’s intellect will help find solutions done properly through planning. Organizing people behind an idea requires a large network of people and the people behind an idea help guide where it can go. Failing towards a goal is progress, but failing away from a goal leads away from a goal. A people without vision are lost. A vision and a belief system will help lead someone to their goal.

Using the four principles, Derreck Kayongo has been successful as one of the leaders in the field of global sanitation as he has made strides in providing communities with the means of proper sanitation. Kayongo emphasized these ideas during his visits to the Non-Profit Leadership Association and the Idea X-Change where students and faculty had the opportunity to engage in more intimate conversations on entrepreneurship and non-profit leadership.

This entry was posted in Entrepreneurship, Events, Kudos, Leadership. Bookmark the permalink.