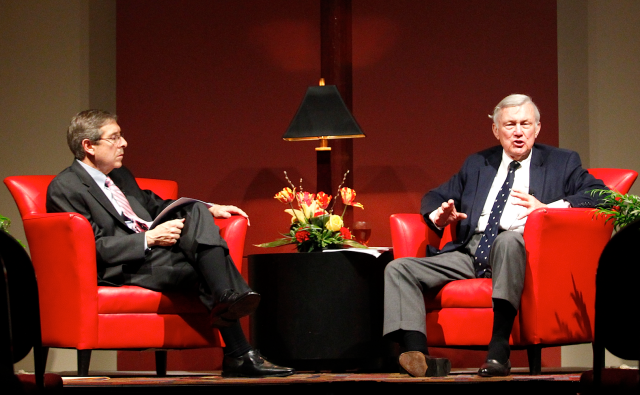 By Luke Longfield – The 2013 Distinguished Executive Lecture in Business and Leadership was presented April 9 by Mr. Landon H. Rowland, Chairman of the Board of Lead Bank and Ever Glades Financial in Kansas City.  A graduate of Dartmouth College and Harvard Law, Mr. Rowland previously served as President and CEO of Kansas City Southern Industries, Janus Capital Group and DST Systems Inc.  While at Kansas City Southern Industries, the transportation division acquired the Mid-South Railway, Gateway Western Railway, Transportacion Ferroviaria Mexicana, and the rights to Panama Canal Railway. 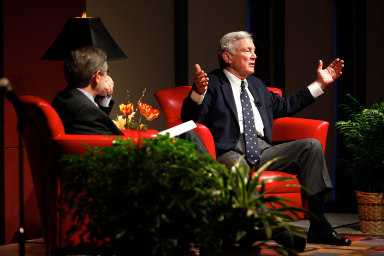 The format for the evening event was interview-style, as William Jewell College President Dr. David Sallee interviewed Mr. Rowland with a number of questions and conversation starters for the audience of over 300 students, faculty and guests.

In response to the opening question concerning his preparation to navigate a wide-ranging career, Mr. Rowland credited his associations with unusually talented supervisors and mentors, and his legal education and practice as a litigator.

In discussing the successes of the organizations he has led, he emphasized the importance of planning, alert opportunism and institutional continuity.  He described institutional continuity as the people, history, traditions and commitment to an enterprise that guide a company over time.  Throughout the evening, he gave vivid examples of leaders and visionaries he has worked with throughout his career, as well as challenges, opportunities and lessons learned.

During his concluding remarks, Mr. Rowland affirmed his belief and confidence in the private, free market system while emphasizing the importance of competition, competence, persistence, adaptability and individual commitment to one’s community and neighbors.

This entry was posted in Events. Bookmark the permalink.