By Sarah Horn – Justice Summit 2012, sponsored by William Jewell College’s Center for Justice and Sustainability, highlighted the Village Partners Project that Jewell has been developing for the last 5 years.  Since 2007, under the leadership of Jeff Buscher and Lori Wetmore, Jewell has partnered with the village of Embarcadero in Honduras, to create a relationship based on collaboration and sustainable development.

The Summit schedule contained an overview of the Village Partners Project Approach, descriptions of similar projects from representatives of other colleges, a panel presentation from two featured guests from Honduras, and a keynote address from Marco Caceres, creator of Project Honduras.  Throughout the workshop, there were many breakout sessions where positives and negatives of the Village Partners Approach were discussed and new ideas were generated.

This approach is unique in how it prepares the students involved and creates a relationship with the community it is engaging.  Students take a seven-week course prior to leaving for Honduras; assignments include pre and post-trip surveys and reflection papers used to document the growth in the student.  There are also two required readings, a research paper on Honduras, and team-building activities.

A distinguishing factor in the relationship between William Jewell and Embarcadero is that Jewell is not the directing force.  When Jewell introduced this program to Embarcadero, the leaders created a list of things that they, as a town, wanted to improve.  William Jewell utilized the expertise of multiple departments on campus to design solutions to some of the village’s problems.

Embarcadero, like most Honduran villages, had a problem with sanitation; their bathrooms consist of pit latrines that fill up and contaminate their water.  The Science Department of William Jewell College invented a dry latrine that not only fixed the contamination problem, but also turned the problem into fertilizer.  Jewell taught the village to make these latrines and provided some of the funds for implementation.  The villagers of Embarcadero have been generous in spreading the knowledge further and neighboring villages have adopted the design. 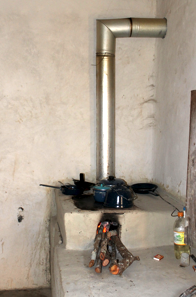 Another improvement the people of Embarcadero deemed necessary was the wood-burning stoves that contaminated the air inside of their homes, both unpleasant and unhealthy for families.  The villagers were taught how to make stoves that both directed the smoke outside of the house and reduced the amount of wood needed by decreasing the surface area of the stove.

More recently, the town decided that they needed a store for their next step in economic development.  With the help of a few Jewell business students and an intern from the Honduran college, University of Atlantida, they have been able to maintain a small store, “La Flor del Campo” with hopes of it growing in the near future.

The villagers are extremely proactive in improving their town and have recently taken steps to get electricity and a fishing boat.  They believe that after these items are attained they will be a model village in Honduras.

Sarahi Zeron, the intern who helps with the village store, and Rafael Carias, a retired professor and invaluable business contact were able to come to the Justice Summit and give updates on the village of Embarcadero.

Marco Caceres, creator of Project Honduras, a non-profit that tracks other non-profits in Honduras, praised the Village Partners Model for its intentional focus on building relationships and sustainability, urging William Jewell College to spread the model and engage additional colleges and communities.

This entry was posted in Kudos, Students. Bookmark the permalink.