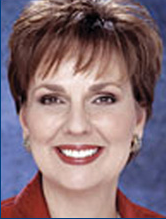 By Hollie Rankin – Distinguished Alumna, Patricia Garrett Campbell ’68, revisited the William Jewell College Campus in March as an Achievement Day honoree.  In her leadership position as National Sales Director with Mary Kay Cosmetics, Ms. Campbell led a group of over 3,000 women whom she trained, motivated and inspired.  She has developed more than 130 women into leadership positions and has helped over 230 women earn a company career car.  Mary Kay, Inc. selected Campbell as their top trainer to send to China to train 5,000 directors in 2006.   As a Physical Education and Sociology major while at Jewell, Ms. Campbell had no intentions of being involved in either the business or cosmetics industry.  Taking the job as a supplement to making ends meet, Patricia’s temporary intentions with Mary Kay turned her into an industry-dominating entrepreneur.

While on campus to be recognized for her extraordinary achievements in Mary Kay Cosmetics, Ms. Campbell was also very involved with the current students.  One interaction with students took her back into the classroom setting as a guest lecturer for a roundtable discussion with top business students in Professor Don Huntington’s Advanced Seminar.  During this discussion Campbell shared immense insight into her personal and professional story, giving students great advice and inside information on how to succeed in the business world.

Ms. Campbell’s story with Mary Kay is one of liberation for women.  When Mary Kay first started in the 1960s, women were facing severe inequality in the workplace. Selling cosmetics helped to change that, giving women an opportunity to prove their power in business.  Patricia lives by the notion that necessity is the mother of invention and desperation and determination are her motivation.

Ms. Campbell’s successes at Mary Kay have allowed her to give back to the community in a tremendous way.  During her 37-year career with Mary Kay, she also founded and ran the Branson Performing Arts Academy to bring “ballet to Branson” and introduced dancers to the Branson stage.  The company grew to 21 teachers and over 400 students with three major performances a year including “The Nutcracker” every Christmas.  In 1993 she built the Branson Performing Arts Center, which was sold in 2007.  Campbell is now retired from Mary Kay and is residing in Branson, MO where she plans to enjoy the peace and quiet before potentially re-engaging in the business world as a coach and mentor.

This entry was posted in Alumni, Courses, Events. Bookmark the permalink.